We have our very own “secret sanctuary” in sunny Florida.  A curious and interesting place, Cape Romano is at the southernmost tip of Ten Thousand Island (the uppermost of the mangrove islands). It is located just a few miles south of the luxury resort community of Marco Island, on the Gulf side. The sky is a lovely, brilliant blue, the sun is shining, the air is dry, and a cool breeze is blowing with temperatures in the mid to low seventies during the winter months. 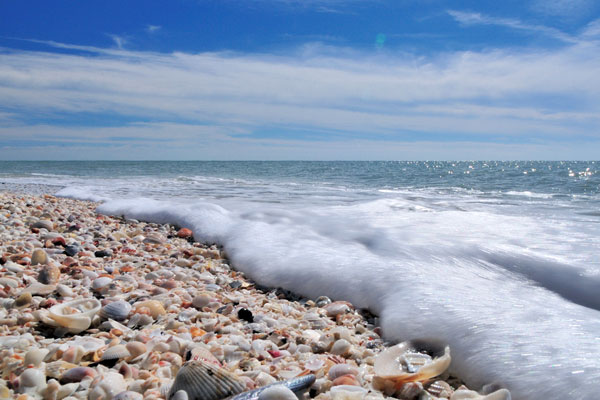 Florida has both a cosmopolitan appeal in places like Jacksonville, Miami, and Orlando, as well as old world charm in places like St. Augustine, Marco Island, and Amelia Island.  All of these places are wonderful in their own way, but the most wondrous places in Florida are the most obscure.  Many people have come to love the beaches at Panama City, Sanibel Island, and Captiva, but there are a tiny few remaining beautiful beaches that are a bit more remote. The beach at Cape Romano is one of these places. 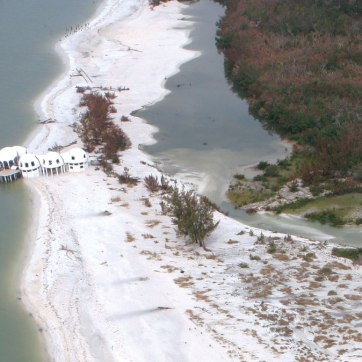 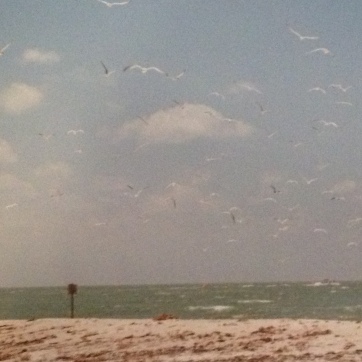 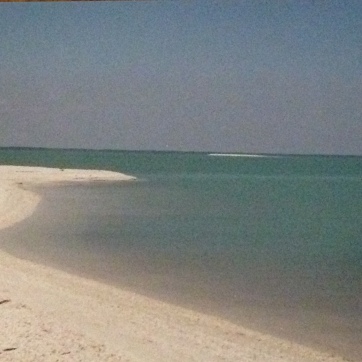 Accessible only by boat or Jet Ski, Cape Romano is a quiet place for reflection in the early morning or late evening, but it does get swamped by visitors from Marco on Jet Skis by mid-day on the weekends. During the week; however, in the twilight of dawn or dusk, it is as if you have transported into a surrealistic dystopian, sci-fi, or fantasy world.

To travel to this location you will find yourself on the Tamiami trail, mentioned in many books set in Florida, otherwise known as “Alligator Alley”. The best way to approach the island is in a little flat bottom jon boat you can launch from the Goodland marina.  Goodland is a sleepy little fishing village located in the midst of the mangroves at the very beginning of the Ten Thousand Islands.  Their biggest boast is a visit from Donald Trump, back when he was considering installing a casino at Cape Romano.  I am glad he did not choose to destroy the splendor of the sanctuary, for it surely would have. 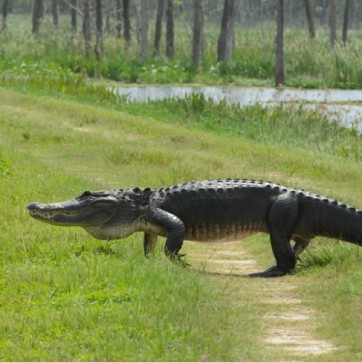 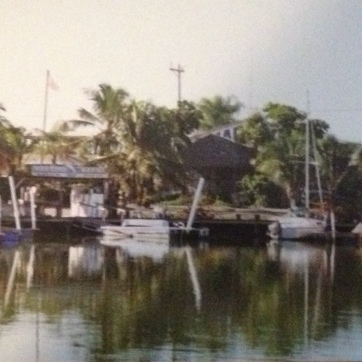 As you motor carefully through the shallows of the brackish waters of Gullivan Bay, the dolphins swim alongside your boat in playful pods teasing and tempting you to join in a swim as they guide you out to deeper waters. You won’t miss the Cape when you see the unique dome home that was established here by Bob Lee in 1980.  This is Bob with his fresh caught snook. You can read more about Bob, his adventurous project, and his family here:

Coastal Breeze News in this article by Natalie Strom.

Once self-sustaining, powered by solar panels, with a 23,000 gallon fresh water cistern, the home is no longer habitable. 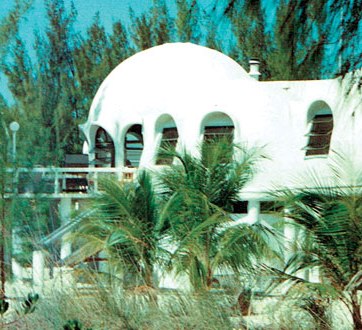 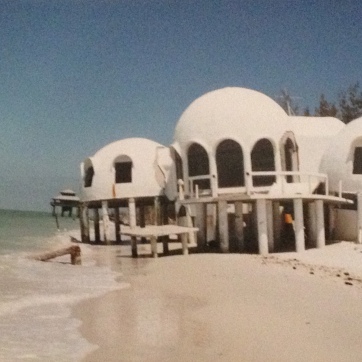 Hurricane Andrew came through in 1992 and stripped about 600 feet off the beach sending most of the dome dwelling, and a couple of other homes in the boating community, into the sea. The Environmental Protection Agency ordered the removal of the structure in 2007, (which has not been done and it is assessing the owners fines daily). Building on the sanctuary island is no longer allowed.  There is a cut through the middle of the island called Morgan’s Pass, also created by hurricane activity, where an estuary runs into a deeper pool of salt water. Fascinating sea life thrives here. Anemones, starfish, urchins and other small sea creatures abound. 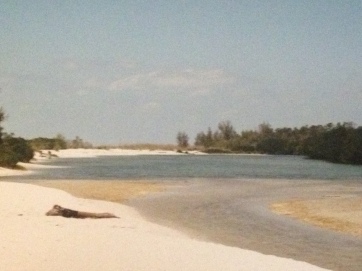 On one side of the Cape, the seashore is two feet deep in shells. On the other side, there are miles of white sand and driftwood.  There are many little sandbar islands dotting the turquoise waters around the Cape that are covered with birds and are protected bird sanctuaries.  They feast on the abundant shell life. The birds nest here year round. Their calls can be deafening when they are disturbed.  Most all of the larger sandbars for bird sanctuaries are marked off-limits to humans.

Shelling is my favorite pastime here, collecting hundreds of samples over the years. 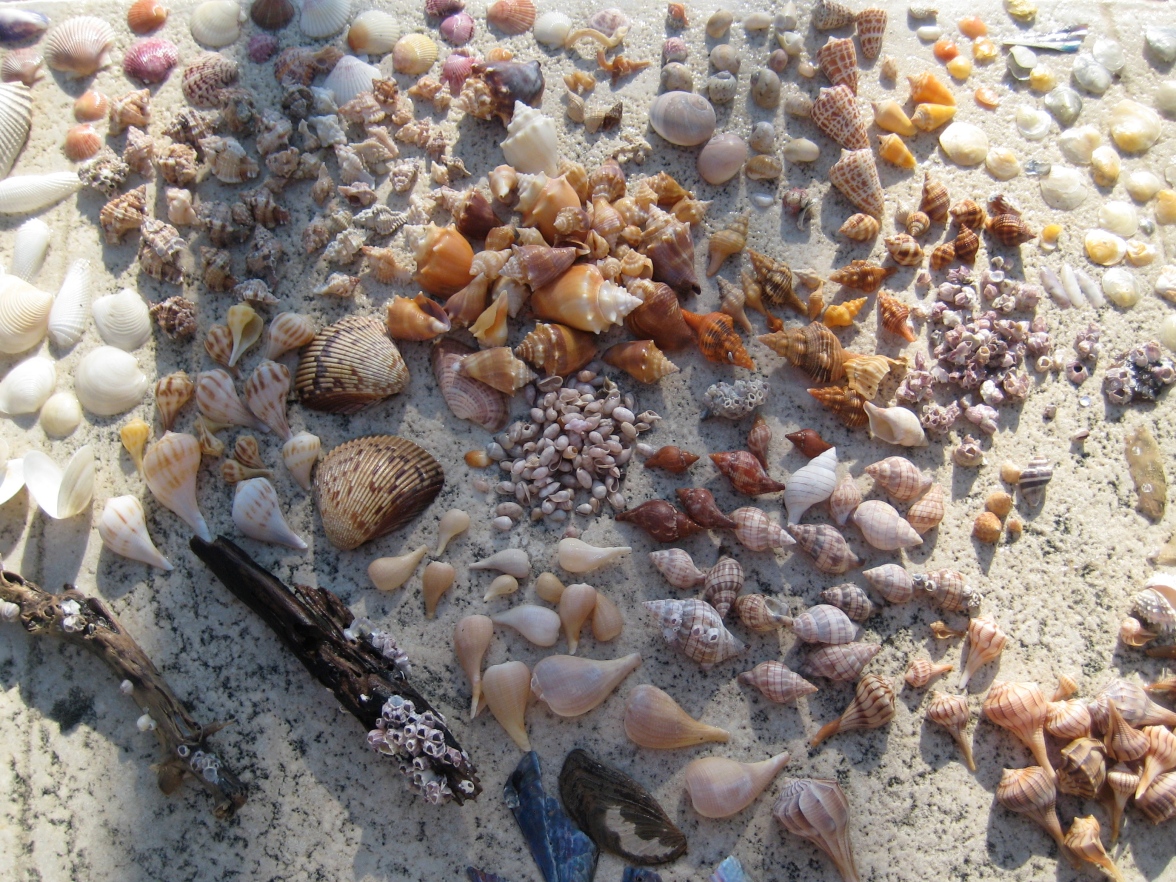 There are certain currents at specific times of the year that bring King’s Crown and whole sand dollars washing ashore in great heaps.  I hope that civilization can preserve the sanctuary, and it remains as unspoiled as possible for future generation to enjoy.

S.K. Nicholls is an RN, author, and artist who lives with her husband in an artsy fishing village on a tiny Florida island called Matlacha (Matt-La-Shay). In her youth, she resided at the Ethel Harpst Home for Children and Youth in the North GA Mountains, with extended visits with her grandparents. Four adults call her mom and four little people call her grandmother. Her dharma involves creative expression. View all posts by S.K. Nicholls